PotalaPalace
"Potala" is a Tibetan transliteration, that is, "Putuo Luo". According to legend, the Tibetan Buddhists believe that the Red Mountain can be comparable with the concept of the holy temple of Santo Tuo Luo, it is compared to the second best of Putuo Luo, Potala Palace hence the name. Famous Potala Palace, an area of 100,000 square meters, known as one of the world's top ten buildings. It is located in Lhasa, Tibet, northwest of the Potala Hill, by the palace, forest card, castle three parts. Yuanwang Gong Yu stacked, towering towering, close look magnificent, magnificent fisheries, overlooking the city overlooking the city, proud of the mountains. It is China, is also one of the most magnificent religious buildings in East Asia, called the Tibetan culture of art treasures.

Potala Palace was built in the 7th century Songzan Gambo period, was called "quite Zhang Malibu child", the construction of the palace room 999, together with the original building red building a total of 1000. Palace Fort between the road, very spectacular. 1645 (Tibetan calendar year) the fifth Dalai Lama in Qinghai Mongolian chiefs under the support of the law force to obtain the power, in order to consolidate the political feudal feudal serfdom system, to expand their political influence, announced the reconstruction of the Potala Palace, by Sullivan Gordon. Reconstruction, the demolition of the ancient ruins of the Tubo Dynasty, preserved the Songzan Gambo period of the repair hole and the Buddha statue of the Buddha, and as the center east to the west to build the White House, since then, the Potala Palace as a dynasty Lai Lama living and engaged in political activities of the place, is the old Tibetan political and religious unity of the power center, until 1959. V after the Dalai Lama after the construction of the Red Palace and the pagoda, after the Potala Palace has repeatedly renovated and alteration, beginning with today's scale. If the 7th century "Potala Palace", as a palace fort, political symbol, mainly shows the supreme power of human slaves and invincible martial arts, then, the fifth Dalai Lama reconstruction of the Potala Palace by the human Into the Buddha domain, the whole building is a godly idol worship.

Palace wall, it is sigh

Today's Potala Palace, the most mysterious, but also make Chinese and foreign architects called "absolutely" is the palace wall. Potala Palace by color is divided into two parts of the Red Palace and the White House, with the size of granite. It is said that the palace wall is completed by the masonry in the area of Lhasa, corner of the corner if the ax. West wall by the possession of masons completed, stressing smooth. Legend, from the east wall to throw a whole sheep, to the wall of the sheep can be split in half; from the west wall to drop an egg, rolled to the bottom but intact.

Potala Palace built in the Red Hill, the depth of the wall of the wall thickness of more than 5 meters above the gradual contraction, to the top of the palace, the wall thickness of only about 1 meter. Part of the wall of the sandwich is also injected into the iron juice. All this, to ensure that the palace in 1300 years of stalemate. Interesting is the Potala Palace and white horse grass (scientific name strange weed) wall, grass wall and cow dung wall, unique plateau style.

On the walls of the various palaces (a total of 1,000 houses) in the Potala Palace, there are murals and scrolls of Thangka and wooden engravings, which are delicate and smooth. It can be said that the Potala Palace is a huge Tibetan art museum. The fresco is the most precious part of the museum. The earliest existing "Qu Jie Chabu" Buddhist temple, 1300 years ago, the murals so bright color. History, religion is the main content of the murals. In addition to the Buddha, the Buddhist story, the Tibetan women and children familiar with the "monkey into the" legend, the fifth Dalai Lama to Beijing to see the Emperor Shunzhi, Princess Wencheng into the possession of major historical events, can be found in the fresco of the Potala Palace The.

Potala Palace, the magnificent palace house, the most striking or that small and low "Code plus bamboo" (Guanyin Buddhist temple), which is the only one left the seventh room, is said to be Songzan Dry cloth and Princess Wencheng married house. Room saved Princess Wencheng statue, although only one foot tall, but the image is beautiful. Because it is by far the oldest house, so it is particularly valuable.

The Pagoda is the most glorious place in the Potala Palace, where the believers worship the most. One of the fifth Dalai Lao Sang Gyat the largest tower, the tower is about five stories, all wrapped with gold foil. According to experts, the construction of this tower, the common gold more than 110,000, and inlaid with more than 1.5 million pieces of diamonds, pearls, jade and coral and so on. In addition to the Pentecostal Faith, there are sandals, satin, precious stones and extremely precious classics. There is a total of eight Dalai Lama's pagoda in the palace of Potala, which holds their legal bodies with a variety of valuable Tibetan medicine. Potala Palace can be described as the world of Buddha, the size of the Buddha countless, the palace contains the Sui Dynasty and the Tang Dynasty Sakyamuni like. In addition, there are a lot of gold, silver, copper, jade, horns, mud made of Buddha and Buddhist masters of the statue. In addition, the Potala Palace contains a large number of scriptures, India has lost the Bayeux, gold powder written by the Tripitaka "Gan Zhu Seoul" (Buddhist Department) and with several gold and silver jewelry written in the Tripitaka "Danzhuer". The palace also retains many historical relics that reflect the relations between the Tibetan and the Chinese, including the gold stamps of the Qing dynasty, and the books and books of the Qing dynasty. They are priceless and dazzling. In the Potala Palace, the precious sculpture art and paintings are numerous, almost everywhere are priceless treasures. And "Papa Lacheng Guan audio and video" was able to be honored as "the treasures of the town hall", enough to prove its extraordinary value. It is said that this statue of wood from the 7th century to the present, is formed by the sandalwood natural shape of the Buddha, the whole statue without processing, only colored, was in India, Nepal at the junction of the land. If no one told it, it would be hard to imagine that the statue was naturally formed. Goddess of Mercy face kind, eyes deep, full of cheeks rounded, full of gold and gorgeous clothing so that the entire statue of the extraordinary momentum. It has been standing on the lotus Jintai has been above 1300 years, in the long history of the river, in the era of warfare, this statue of sacred Buddha, more than once beaten or defeated out of Lhasa, , The flow of the hands of the tribal leaders, but every time miraculously returned to the original, to return to the Potala Palace, Enron stand in Pabalakang Sidi. Perhaps it was these legendary experiences that made him more seductive in the minds of Tibetan Buddhists, filled with transcendental atmosphere. In fact, the Potala Palace can be called "national treasure" cultural relics vast, but whether it is priceless pearl Thangka, or magnificent living Buddha tower, have not become the soul of this great palace, and Papa La Like it has been the most devout worship of people. Perhaps from the Nepalese jungle sandalwood tree grew out, they learned the piece of land sacred power, with the supreme mana. The first world Dalai Lama Gondun Zhu Ba, born in 1391, after the possession of the mess place, died in Shigatse Tashilhunpo Temple in 1474.

The second generation of the Dalai Lama, Gondo Gyatso, was born in 1475 in the post-Tibet dynasty, in 1542 died in Lhasa Drepung Monastery.

The third generation of the Dalai Lama Saurang Gyatso, born in 1543 in the pile of Long Kang Sagong, died in Inner Mongolia in 1588. The fourth generation of the Dalai Lama cloud Dan Gyatso, born in 1589 in Inner Mongolia, died in 1616 in Lhasa Drepung Monastery. The fifth generation of the Dalai Lama, Ngawang Sang Gyatso, was born in 1619 in the south of the mountain, in 1682, died in the Potala Palace. The sixth generation of the Dalai Lama, Central Gyatso, was born in 1683 in the door, in 1707 years died in Qinghai.

Seventh Dalai Lama Gesang Gyatso, 1708 was born in more than Kang Li Tong place, in 1757 died in the Potala Palace. The Eighth Dalai Lama was a white Gyatso, born in 1758 in the post-Tuoba area, and in 1804 she died in the Potala Palace。

The ninth Dalai Lama Long Duo Gyatso, 1805 was born in the more Kang Dan Qu Ke place, died in 1815 in the Potala Palace. 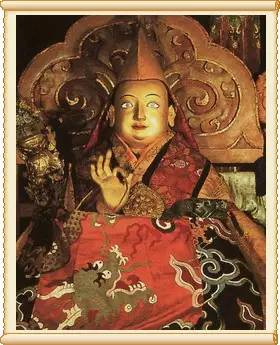 The tenth Dalai Lama Chucheng Gyatso was born in 1816 in the district of Kuang Boer post, in 1837 died in the Potala Palace.

The twelfth generation of the Dalai Lama was born in the Potala Palace in 1875 and was born in 1850. Maitreya Buddha, as the bedroom Gandan Ping measures mainly by the. The Eighth Dalai Lama was built in 1800

White silver thousands of thousands of words Guanyin Bodhisattva, 1903 The construction of the 13th Dalai Lama

Baihar Dorje Zadan, is the second of the Dalai Lama's law enforcement gods, 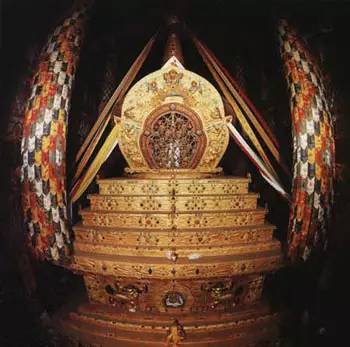 Potala Palace Thangka is a new painting art that emerged during the Songzan Gambo period, that is, a scroll with a satin, with distinctive ethnic characteristics, rich religious colors and unique artistic styles, Tibetan people as treasures. Thangka variety and texture varied, but mostly on the cloth and paper. There are also embroidery, tapestry, tapestry and decals and other fabrics Thangka, and some are still colorful in the pattern, the beads of precious stones with gold in the meantime, the perfect match. Tangka painting art is the work of Tibetan culture, more than a thousand years of far-reaching impact. Potala Palace Thangka content, both the diversity of the Buddha, but also reflect the Tibetan history and ethnic customs of the screen. Thangka composition rigorous, balanced, plump, changeable, the main brushwork and painting mainly.

Treasure Museum is located in the snow town at the foot of the Potala Palace, initially for a Tibetan aristocratic old house, is a strong Tibetan national characteristics of the earth and stone structure, to retain its original basis on the basis of external renovation and interior decoration, is the transformation Into the Potala Palace Museum. There are two large frescoes on both sides of the entrance hall, one of which shows the scene of the Emperor Shunzhi emperor received the fifth Dalai Lama, and the other is the profile of the Princess Wencheng. The museum displays the 14th century bronze eight lotus flower big Weide like, the 9th century Bayeux, the 17th century Qianlong royal pagoda Thangka and many other precious cultural relics. Treasure Museum exhibition is divided into "Shi Hai Gu Shen" and "Treasures Treasure" two parts of the eight units, a total of cultural relics and photos of about 200 sets.

One of the most striking items in the exhibits is the "Eight Lotus Flowers". This is called the treasures of the town hall. This statue of the 14th century high 81.4 cm, for the Tantric worship, but also a form of Tan Cheng. Lotus central for the hi King Kong like, each piece of petals are four Tantric Buddhism on duty, is a typical Ming Yongle years Zhongyuan palace statue style.

5 to 6 century, the Northern Wei Dynasty Sakyamuni argument, it is the treasures of the oldest cultural relics. In addition, the 9th century Bayeux, 12th century white glaze dark seaweed bowl, 17th century peach-shaped agate cup and Qianlong imperial pagoda Thangka, 18th century snuff bottle and many other precious cultural relics are the first time to meet with the public. 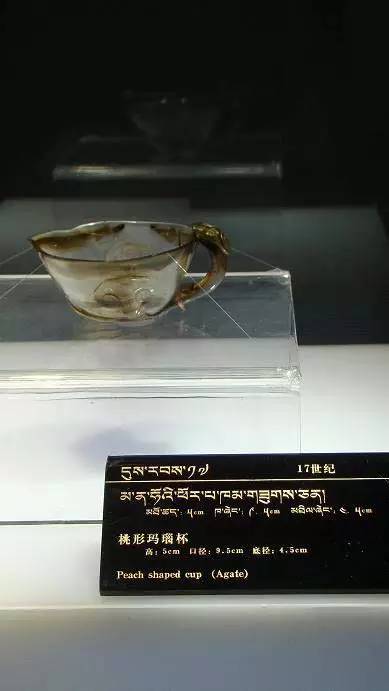